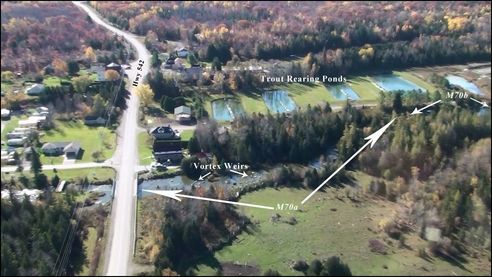 Calvin Pearson & Sons Excavation and Haulage Ltd. was tendered out to supply rock boulders, sweepers, geo-textile, use of hydraulic jack hammer, etc. They began work at the site on August 9, 2008 and the final inspections occurred on Sept 9, 2008.

The objective was to improving fish habitat at the edges and center of the river by establishing a new shoreline that can withstand the force of peak flood flow conditions while providing fish habitat along its edges, reducing stream width and increasing stream depth and improving substrate.  The site design concentrated on restoring the proper bankfull width, which in turn accomplished two goals of the strategy in reducing river width and increasing river depth.  A large excavator mounted hydraulic rock hammer was used in the soft limestone to create pools, narrow overall width and thereby increasing the rivers depth and provide in stream cover.  Large rock piles were strategically placed to positively utilize water flows and random large boulders were added to create more in-stream aquatic habitat.  Additional spawning substrate was applied to the spawning pools and flume.  Proven bio-engineering techniques, canopy planting, was conducted on each of the 4 islands to provide fish and wildlife habitat along the river.  The undertaking utilized heavy equipment; moving field stone material, narrowing and subsequently deepening the stream channel from a width/depth ratio by creating refuge pools.

The rehabilitation of Manitou River Site M-70 involved the installation of the following fish habitat works along two (2) approximately 100m long sections of the Manitou River, located about 400-500m downstream, of Highway  542 near Sandfield, Ontario: two (2) “W” weirs,  one (1) single wing deflector,  one (1) flume complete with five (5) associated rock piles and one (1) sweeper, four (4) islands including thirty-two (32) planted tress, six (6) excavated pools complete with sweepers, placement of broken rock along shoreline, spawning gravel in pools and flume and implantation of the Erosion and Sediment Control Plan.

The work was completed according to the site plans through the cooperation of landowners, dedication of volunteers, consulting expertise of Great Lakes Environmental Services (GLES) and equipment, material, and services of Calvin Pearson & Sons Excavation and Haulage Ltd.  Funds from various sources were used to complete this project.  DFO contributed toward site surveying in 2007 and COA contributed toward site design in 2007.  Heavy equipment rental and material costs were paid for by the following; CFWIP,  COA, and NOHFC.  COA and NOHFC contributed for Site Supervision by a certified engineer.

This project had 97 volunteers working on this project at various times.  Manitoulin Streams had numerous meetings and email communications to discuss the details about this project including sending out Site Design Request for Proposals (RFP), Tender (RFP) and Site Supervision (RFP) to ensure proper delivery of site design and issuing a winner of the bids.  A total of 193 volunteered hours was dedicated by 61 “Manitoulin Streams” committee members attending meetings to discuss planning procedures.  In-kind support from the landowner included clearing an entrance of trees to the site from the Sandfield Station so large equipment would be able to access site. The chainsaw rental cost and the cost for 10 hrs of volunteer time for labour and meetings with the engineer to review site designs.