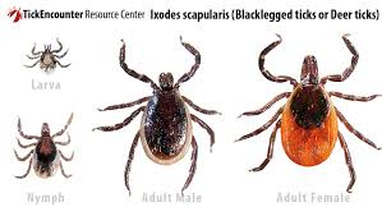 Increasing air temperatures and changing precipitation patterns have the potential to lead to the northward movement of zoonotic and vector-borne diseases. The current trends also have the potential to exacerbate zoonotic and vector-borne diseases that are already present.
Manitoulin Island had its first confirmed occurrence of the Black Legged Tick in 2017. However, it did not test positive for the bacteria causing Lyme Disease.
In 3 of the last 4 years Sudbury has had Black Legged Ticks test positive for Lyme Disease. For every 1 °C increase in mean monthly temperature there is an 8% increase in the incidence of diarrheagenic E. coli.
Certain species of Mosquitos on Manitoulin can carry the West Nile Virus which they pick up from birds. This virus can be transferred to humans, horses and other mammals. Manitoulin is projected to have increases in the number of extreme heat days which has the potential to lead to an increase in heat related deaths.