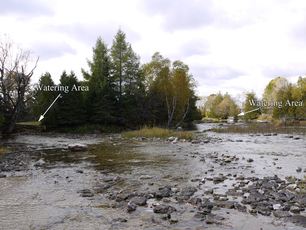 Site M-64 is a site where extensive erosion and scouring of the stream bed habitat  had occurred over the past century due to previous poor land use practices and log drives. In addition to this fluctuating and low water levels decreased the depth of the water in this wide section of the river. In order to rehabilitate this site, bio-engineered site design methods concentrated on restoring the proper bank width, which in turn accomplishes two goals of the strategy in reducing river width and increasing river depth.  A large excavator mounted hydraulic rock hammer created pools in the soft limestone, constrictors such as “W” weirs and wing deflectors were installed to narrow overall width and thereby increasing the rivers depth and provide in stream cover.  Large boulders were strategically placed to positively utilize water flows and to create more in-stream aquatic habitat.

The rehabilitation of site M64 involved the installation of the following 55 fish habitat features along an approximately 120m long section of the Manitou River: one (1) holding pool excavated into bedrock, four (4) random boulders, one (1) single wing deflecto, two (2) pools excavated into bedrock, one (1) flume, six (6) boulder clusters of 3 Total 18 boulders, one (1) “W” Weir, three (3) boulders along an existing bank, two (2) L.U.N.K.E.R.’s, ten (10) root wads over 20m of shoreline complete with back-fill, grass and riparian, vegetation, upgrading of an existing cattle watering pad including the placement of additional, boulders around its perimeter and installation of angled cobble on the pad itself. 12 boulders in total.

A total of 6072 m2 of in stream habitat rehabilitated. Approximate 10 m width buffer of riparian area created which accounts for 579 m2 of riparian and canopy area. With volunteer help a section of fence 57.91 meters in length was repaired and installed to restrict livestock access to the river. Eight (8) volunteers put in 16 hours installing the above mentioned fence.

The landowner contributed 26 hrs of labour and 6 hrs of attending meetings and the in-kind support included supplying materials, cedar rail fencing (175 rails), nails, wire, use of tractor and chainsaw.