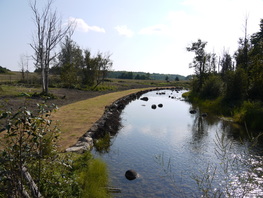 Rehabilitation and reinforcement of the bend in the river is the main focus of this site. There will be sixty-four (64) boulders acompanied by sixty-two (62) root wads used in this bank stabilization. In addition to this work there will be ten (10) random boulders placed in the stream, two (2) lunkers and two (2) vortex weirs. As you can see this job is particularly muddy but the contractor did an excellent job of keeping discharge and sediment to a minimum.

Site M-35 is a site where extensive erosion had occurred over the past century due to previous poor land use practices. In order to rehabilitate this site, bio-engineered design concentrated on restoring the proper bank full width, which in turn accomplished two goals of the strategy in reducing river width and increasing river depth.  Large boulders were strategically placed to positively utilize water flows and to create more in-stream aquatic habitat. This site had a total of 183 in-stream structures created including (2 limestone LUNKERS, 10 random boulders (approx. 1m diameter), 2 vortex weirs, 64 boulders stabilizing the shoreline, 62 root wads stabilizing the shoreline, 6,420m2 of aquatic eco-system created/restored, 7 boulder clusters of 3 (1m diameter boulders) for a total of 21 boulders.  Coir matting was placed along the newly established shoreline and seeded with Right-of-Way grass seed (2,178m2 of riparian (wildlife habitat) to be restored with tree planting in the spring of 2010).

Funding contributions toward the construction of the project include CFWIP, COA and NOHFC ($28,308.40).

In the spring of 2010 approximately 7,644 trees and shrubs were planted along this newly rehabilitated 320m shoreline. This future effort will re-establish a vegetated riparian zone that will serve to stabilize this bank from further erosion and to provide much needed cover and shade for aquatic organisms and their associated species. 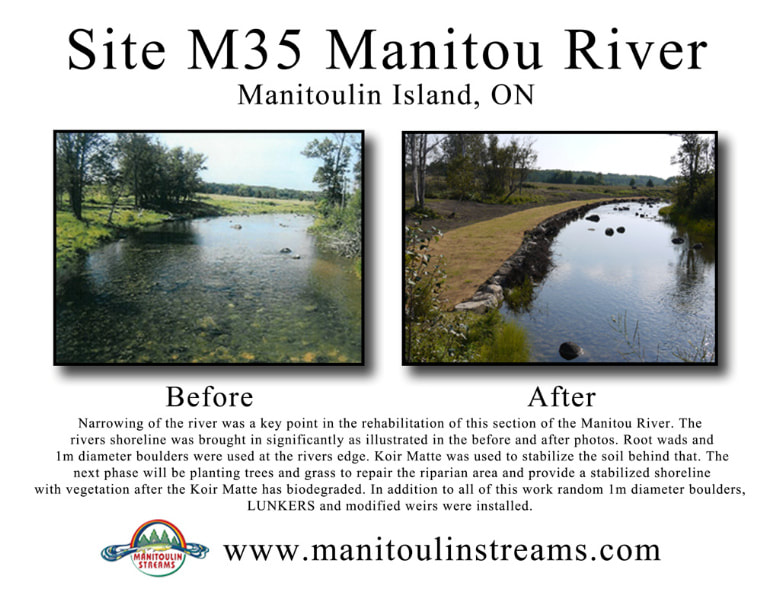