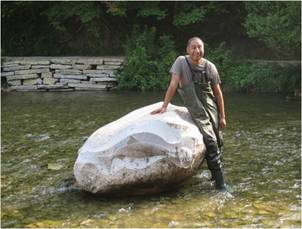 The third site on the Kagawong River for 2015 was a Medium Priority site.  KAG-170 had been stated as exhibiting a lack of in-stream habitat, with a side channel that could be a potential spawning area that could be enhanced or removed depending on flow conditions.  This site also includes the third of Michael Belmore's granite stone carvings, with this one having actually been placed in the stream, acting as.  This was Michael's, and also our, first art installation which also assists in acting as fish habitat directly in the stream.  A great success on all accounts.  Thanks again Micheal, and to all those who volunteered!